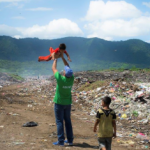 CEWEP supports ISWA’s action against the 50 largest dumpsites in the world.

According to the International Solid Waste Association (ISWA), fifty of the biggest dumpsites in the world affect the lives of 64 million people or roughly the population of the size of France. If there is no immediate action taken against the existing dumpsites, they will account for up to 10% of the global anthropogenic greenhouse gas emissions by 2025 (more information here).

CEWEP fully endorses this action and has signed the declaration to support the closure of the world’s 50 biggest dumpsites. CEWEP has also made its Christmas donation to the ISWA Scholarship Programme which enables children working in the dumpsites of Nicaragua to attend school. More information on the project here.