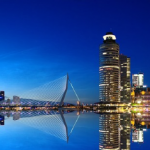 Since 2007, the Rotterdam Climate Initiative aims to transform the city into a landmark for clean energy while developing its growth and attractiveness. In that context, Rotterdam aims to reduce its CO2 emissions by 50% of 1990 levels by 2025.

In order to help the city reach this goal, AVR, Stedin, and Emerald Kalama Chemical developed together a 2 km steam pipeline. For this project, called “Greener steam”, AVR provided the steam from waste incineration, Stedin designed and build the grid, and Emerald Kalama Chemical was the first consumer of the steam, which the company uses for its toluene-based production process.

“Greener steam” has helped Rotterdam reduce its CO2 emissions by 25,000 tonnes each year since 2012, and has saved 15 million cubic metres of natural gas usage annually.

The grid network is estimated to reduce the CO2 emissions up to 400,000 tonnes per year when fully implemented.

The project was awarded a European Responsible Care Award in Energy Efficiency in 2014 by Cefic, the European Chemical Industry Council.